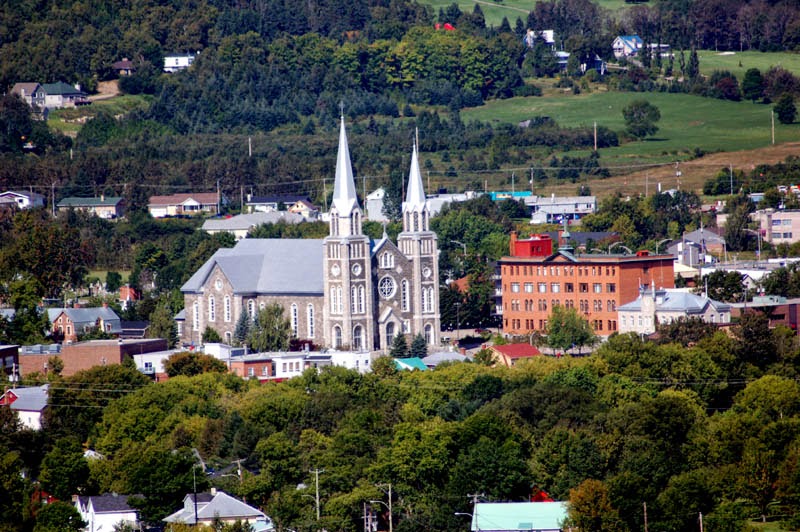 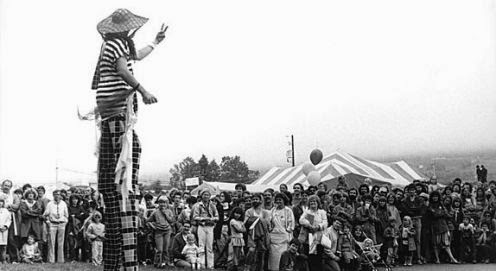 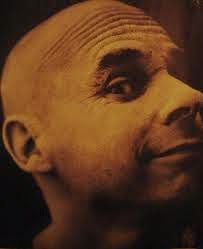 
It all started in Baie-Saint-Paul, a small town near Quebec City, in Canada. There, in the early eighties, a band of colourful characters roamed the streets, striding on stilts, juggling, dancing, breathing fire, and playing music. They were Les Échassiers de Baie- Saint-Paul (the Baie-Saint-Paul Stiltwalkers), a street theatre group founded by Gilles Ste-Croix. Already, the townsfolk were impressed and intrigued by the young performers – who included one Guy Laliberté who became founder of Cirque du Soleil.

The troupe went on to found Le Club des talons hauts (the High Heels Club), and then, in 1982, organized La Fête foraine de Baie-Saint-Paul, a cultural event in which street performers from all over met to exchange ideas and enliven the streets of the town for a few days. La Fête foraine was repeated in 1983 and 1984. Le Club des talons hauts attracted notice, and Guy Laliberté, Gilles Ste-Croix and their cronies began to cherish a crazy dream: to create a Quebec circus and take the troupe travelling around the world.

In 1984, Quebec City was celebrating the 450th anniversary of Canada’s discovery by Jacques Cartier, and they needed a show that would carry the festivities out across the province. Guy Laliberté presented a proposal for a show called Cirque du Soleil (Circus of the Sun), and succeeded in convincing the organizers. And Cirque du Soleil hasn’t stopped since!

Cirque du Soleil is born with the assistance of the Quebec government, as part of the celebrations surrounding the 450th anniversary of Jacques Cartier’s arrival in Canada. The first production, Le Grand Tour debuts in the small Quebec town of Gaspé, and is then performed in 10 other cities throughout the province. The first blue-and-yellow big top seats 800.

After performing in Montreal, Sherbrooke and Quebec City, with Le Grand Tour, Cirque du Soleilleaves its home province for the first time to take its show to neighbouring Ontario. It performs in Ottawa, Toronto and Niagara Falls and the show is simply named Cirque du Soleil.

Cirque du Soleil takes La Magie Continue across Canada, including Vancouver, where it puts on several performances at the Children’s Festival and Expo 86 and in seven other Canadian cities. The big top now has room for 1,500 spectators.

Having triumphed in five cities in Quebec, We Reinvent the Circus is performed at the Los Angeles Festival and then moves on to San Diego and Santa Monica. Exhilarated by the Californian public's response, Cirque du Soleil is an overnight success. The participation of Cirque du Soleil at the L.A Festival is not only an important milestone in its history but also its first visit to its American neighbours.

We Reinvent the Circus continues its North American tour, after a brief appearance at the Calgary Winter Olympics. Wherever it goes, the result is the same: the performances sell out, and the critics rave.

Montreal is the setting for the world premiere of a brand-new production, Nouvelle Expérience, in a new, 2,500-seat big top. With this new production, Cirque du Soleil shatters all previous records for ticket sales. Meanwhile, Cirque makes its first foray into Europe, staging We Reinvent the Circus in London and Paris. The overseas excursions have just begun.

Fascination, a collage of the best acts from past shows, enables Cirque to make a name for itself in Japan. The show opens in Tokyo and then moves on to seven other cities. Meanwhile, in Europe,Cirque du Soleil joins forces with Switzerland's Circus Knie and stages a show in over 60 towns throughout the country. In North America, 1992 sees Cirque du Soleil make its Las Vegas debut whenNouvelle Expérience kicks off a year-long engagement under a big top at the Mirage Hotel.Cirque du Soleil adds a monument to its repertoire of shows: Saltimbanco. Premiering in Montreal, this latest production begins a lengthy tour of North America.

Following the successful Las Vegas run of Nouvelle Expérience, Cirque du Soleil moves into a theatre built to its specifications at the new Treasure Island Hotel. A 10-year contract is signed with Mirage Resorts to stage Mystère, a gigantic production befitting this show business capital.

Cirque du Soleil celebrates its 10th anniversary with another production, Alegría. True to tradition, the world premiere is held in Montreal. Saltimbanco embarks on a six- month run in Tokyo in 1994 that attracts a great deal of attention.

Cirque du Soleil responds to a request from the Canadian government and creates a show for the heads of state gathered at the G7 Summit in Halifax, Nova Scotia. Also in
1995, Saltimbanco sets out to open officially the European market. Cirque's spectacular white big top with seating for 2,500 spectators makes its first stop in Amsterdam, followed by Munich, Berlin, Düsseldorf, and Vienna.

In April, Cirque launches Quidam in Montreal. After finishing its hometown run, Quidam heads off on a North American tour. Meanwhile, Alegría sets out to tour Japan for a few months.

In Montreal, the inauguration of the brand new International Headquarters is held; the
Studio is now where all of Cirque's shows will be created and produced.

In October, the second resident show for Cirque du Soleil, “O”, takes to the stage of a new theatre at the Bellagio in Las Vegas. This production is Cirque's first aquatic show and an important milestone in the company history. With this show, Cirque is now known internationally. In December of the same year, Cirque inaugurates yet another permanent show, La Nouba, at the Walt Disney World Resort near Orlando, Florida.

A brand-new Cirque du Soleil production, Dralion, launches its North American tour in
Montreal. With Saltimbanco, Cirque sets up shop in Asia and the Pacific.

Movie fans come out in droves to see Cirque du Soleil on the IMAX screen for the first time ever, as its large-format film production Journey of Man (Passages in French), distributed by Sony Pictures Classics, premieres worldwide.

Cirque du Soleil keeps on growing with the inauguration of a 15, 000-square-metre addition to its International Headquarters in Montreal.

The newest addition to the Cirque family, Zumanity is born in August. It is an adults- only resident show at the New York-New York Hotel & Casino in Las Vegas. The filming of a new television series—the first to be produced entirely by Cirque du Soleil Images—is wrapped up in the late summer. This unique family TV series brings together acrobatic acts within a dramatic comedy framework. The series is aimed at international television markets, including Canada and the United States.

Cirque du Soleil celebrates its 20th anniversary in 2004. A number of events mark the occasion: among other things, a book is launched, entitled 20 Years Under the Sun, which recounts the unusual history of Cirque du Soleil step by step, and Cirque sets the first Guinness World Record for the largest number of stilt-walkers (544) at the same time and place. Cirque du Soleil launches a new resident show, KÀ, in the fall at the MGM Grand in Las Vegas.

The year 2005 is marked by the Montreal launch and world premiere of Corteo, Cirque’s latest touring show. In July, Montreal hosts the XI FINA World Aquatic Championships, for which Cirque du Soleilcreates the opening ceremony show.

Cirque du Soleil first-ever musical show in arena, DELIRIUM, premiered in Montreal in January and has begun its US tour. Cirque du Soleil is also preparing a fifth permanent show in Las Vegas: LOVE, which celebrates the musical legacy of the Beatles and premieres in June at The Mirage. After touring in North America, Europe, Asia and Australia, Cirque du Soleil has set out to make a name for itself in South America by presenting its show Saltimbanco in Chile, Argentina and Brazil in 2006.
Cirque du Soleil has entered into an exclusive agreement with CKX Inc.—through its subsidiary Elvis Presley Enterprises—for the creation, development, production and promotion of Elvis Presley projects, featuring touring and resident shows, as well as multimedia interactive “Elvis experiences,” throughout the world. The first Elvis Presley projects are expected to debut in 2009.

KOOZA, a new touring show, is launched in Montreal in April 2007. In February, Cirque du Soleil puts on a pre-game show performance for Super Bowl XLI in Miami. In November, Cirque presents Wintuk, a show designed exclusively for the WaMu Theater at Madison Square Garden in New York. Starting in 2007, this seasonal show will be performed for 10 weeks for at least four years. Cirque du Soleil has also launched a fiction/non-fiction book entitled The Spark, which invites readers to discover the power of creativity and imagination and apply it in their own lives. Written by John Bacon and based on an original idea by Lyn Heward, the book is distributed in several countries. After having toured for 14 years and being performed before more than 9.5 million spectators, Saltimbanco is reborn in July as it takes off on an arena tour of more than
40 cities in Canada and the U.S.

This was an historical year for Cirque du Soleil as the company launched three new permanent shows this year: ZAIA at The Venetian Hotel in Macau (China), ZED at the Tokyo Disney Resort in Tokyo (Japan) and CRISS ANGEL Believe at The Luxor Hotel in Las Vegas (United States). Cirque du Soleilalso created a show-event presented at Colisée
Pepsi in Quebec City in the scope of the 400th anniversary of the city. Istithmar World,
the investment arm of Dubai World, and Nakheel have together acquired a 20 per cent stake inCirque du Soleil.

Cirque du Soleil celebrates its 25th anniversary and launches the 25th production of its history. This new creation, OVO premieres in Montreal in April. The publication of a book on Cirque costumes and the launch of a double CD containing a music compilation, are among the commemorative activities of this anniversary.
In September 2009, Guy Laliberté became the first Canadian private space explorer. His mission was dedicated to raising awareness on water issues facing humankind on planet earth. Under the themeMoving Stars and Earth for Water, this first Poetic Social Mission in space aimed at touching people through an artistic approach: a special 120- minute webcast program featuring various artistic performances unfolding in 14 cities on five continents, including the International Space Station.